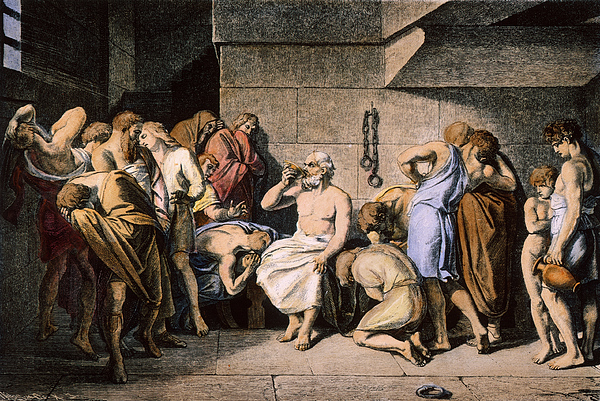 When Socrates was on trial by the Athenian government he was informed that, if found guilty, the penalty would be DEATH. His crime? "Corrupting the youth of Athens" by teaching them and asking them questions (i.e. encouraging them to THINK). (Rolls eyes.)

Against the tearful persuasions of his friends who loved him dearly, Socrates decided to go on just being his old philosophical teaching self and prepare nothing in his defense except, of course, the TRUTH. And of course they killed him for it.

But Socrates' death itself was sufficient punctuation to his life's work to EXPLODE his message forward THOUSANDS of years all the way through the Dark Ages and straight into the 21st CENTURY and probably far BEYOND! And is this not what we ALL want; to have our life's work outlive us and make the world better for multiple generations to come!

I spoke with a friend of mine the other day who is a TERRIFIC artist. But because she is concerned about the impact her work will have on certain family members, she is afraid to let her more controversial themes shine through by making these art works public. These brilliant pieces are the embodiment of messages she has been called to declare to the world. And yet she hesitates and it makes her ability to do her life's work scattered and sporadic.

Even though there is (luckily) no threat of death involved here, there is still an element of fear (from which we all occasionally suffer) that needs to be overcome, and that's where Twichery Focus & Inspiration Oil comes in. It helps you not only be able to focus on your work, but to focus on the pathway to bringing that work forward and into the world.

You may have friends like mine who you know could totally rock the planet if they would just embrace the destiny to which they are called. It's pretty much ALL they talk about, they're passionate and qualified, and all they lack is that final boost of faith and inspiration to make them OWN IT. And you know whom I'm talking about.

This is precisely why I am absolutely thrilled to share my Focus & Inspiration Oil with you. It is formulated exactly for the purpose of blessing your dear friends (and maybe even yourself!) with the greatest gift of love you can give, which is your powerful vote of confidence.

I bless you, dear friends, with my joy of The Craft and I look forward to hearing YOUR stories of the blessings and victories that grace your life by using Twichery Focus & Inspiration Oil!